Meeting SG girls: everything you need to know

For all the guys out there who have ever wanted to meet SG girls (Singapore girls) but have absolutely no clue how to do it, this article is for you. FYI, this is a bare-bones “beginners” guide, written by a white guy born and raised (and currently living) in the US. Everything I’m going to tell you is based on my own observances while on a recent trip to Singapore.

Just as it was in my recent post about meeting Guangzhou girls, I do need to let you know that I am a married a family man now and my trip to Singapore wasn’t about meeting SG girls. Heck, I didn’t even talk to any other than hotel and restaurant employees.

However, I have been to Singapore many times over the past 20 years, and I’ve certainly learned a thing or two about the dating world culture there. Not through personal experience, but through simple observations and discussions with friends (male and female).

As a matter of fact, I’m so comfortable and confident with my understanding of the culture in Singapore that it’s probably one of the first places I would ever run to if I had to start my life over again. 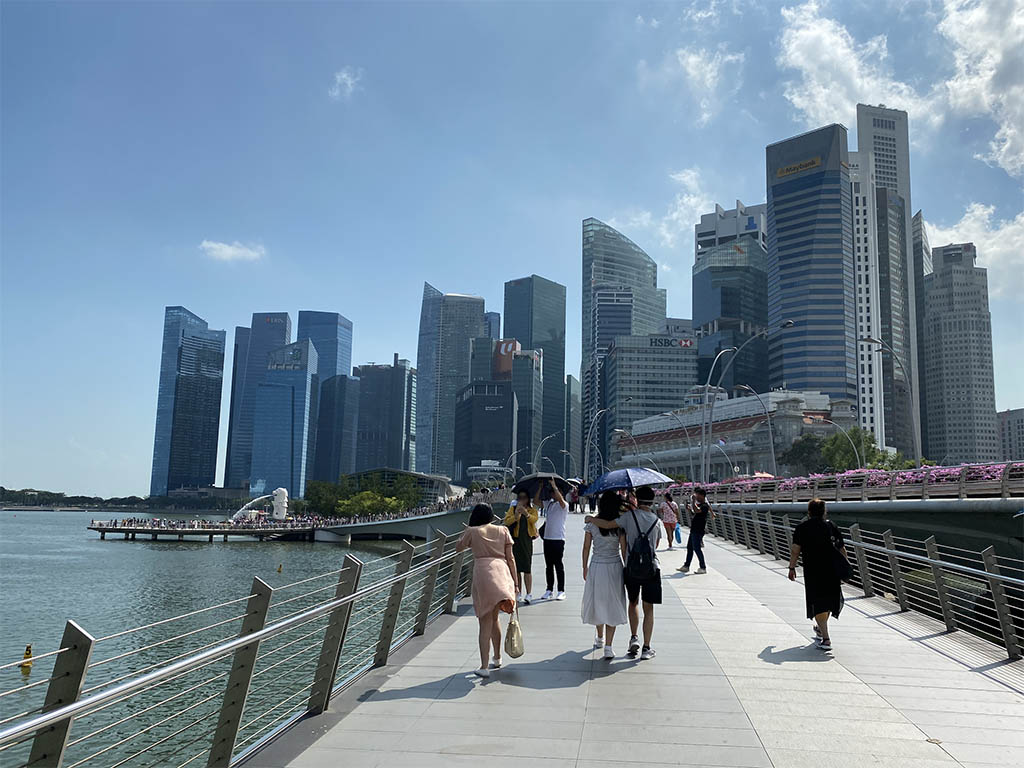 A typical afternoon scene in Singapore. Have fun out there!

Before getting into the nitty-gritty of how to meet SG girls, I do need to get something off my chest: The term “SG girl” is actually quite vague and it has a lot of meetings.

You see, Singapore is a melting pot of cultures and you’re going to find people of all different types of nationalities there. Without even researching the exact statistics (they’re not important), my gut feeling is that a majority of the population is mix of Malaysian and Chinese. However, take a walk in any part of the city and you’ll see people of nearly any every nationality – from Western to Eastern.

SG girls are not one specific nationality. True, Singapore is a world class (and very wealthy) city / state with it’s own citizens who hold Singaporean citizenship. But from what I can tell, the majority of the girls here are a mix of races from all over Asia. For the life of me, I wouldn’t be able to pick out a born and raised Singapore girl in a lineup of others if I was forced to do so.

Perhaps that’s just my naïve western culture shining through, but the term “SG girl” has always bothered me. It just doesn’t have that much meaning. That’s just my opinion anyway.

One of the main benefits of Singapore being a melting pot of cultures is that you’re going to find all different kinds of girls here. Based on my own personal experience, it also happens to be one of the friendliest countries / cities that I’ve ever been to.

Everybody is extremely friendly, and the girls are extremely approachable (though not as approachable as Hong Kong girls IMHO). My single friends tell me that Singapore is a very easy place to meet girls. And I’ll be the first to take their word for it, since two of my good buddies are married to Singaporean women. Or, more specifically Malaysian women who happen to be from Singapore. See what I mean about the mix of cultures?

As far as personality traits go, girls from Singapore seem to be more friendly and open compared to Northern Asian women. Of course Korean and Japanese women are extremely friendly, but it’s much harder to get to know them. This is most likely because they have a natural tendency to be reserved and careful about talking to strangers.

Another thing to note is that Singapore is one of the cleanest and most organized cities on the planet. From my general observances, this cleanliness applies to the girls as well. Everybody is very well-dressed and very clean.

Even though I’m old and married now, I still have a natural tendency to walk around the cities I travel to and think about what it would be like if I were still single. Shame me for that if you will, but I am very confident that every married person on this planet has these thoughts from time to time. It doesn’t make you a bad person – just as long as you don’t act on those thoughts. Then yeah. That’s bad.

Anyway, if I were still single and looking to meet women, I think it would be quite easy in Singapore. Here’s how I would do it:

1. Spend a Saturday or Sunday afternoon in the downtown core area

The downtown area of Singapore (especially near the Merlion statue on the waterfront) is a mecca for both tourists and locals on weekend afternoons. It’s a very relaxing and scenic way to take a walk and unwind, and the opportunities for approaching single women are limitless.

You’ll also notice a large number of Filipino and Malaysian maids gathered in groups enjoying their time off together. Most of these women are single, and from what I can tell, appear to be extremely friendly and approachable. And they are everywhere – even in the cool and shady underground street crossings (they’re down there to escape the heat and humidity).

As I mentioned earlier, Singapore is extremely fashionable and clean. The girls are as well, so guys who don’t take pride in their own appearance won’t do well here. Ripped T-shirts, dirty shorts, and flip-flops on the brink of disintegration will not get you far. Trust me on this.

Note that this doesn’t mean that have to dress like a king to meet a pretty SG girl. As long as you’re wearing something somewhat fashionable and clean, you will do OK. And for the love of God, comb your hair and make sure any facial hair you have any isn’t gnarly and completely out of control.

You’d probably think that this goes without saying, but you’d be surprised how dirty / unkempt guys I see complaining that they can get a girlfriend. Don’t be that guy.

If you’re somewhat shy about approaching girls on the street (or you just want to speed up the process), do yourself a huge favor and sign up for eHarmony.

Setting up dates with several girls even before you arrive will make things so much easier and more organized for you (and for them). You’ll be going on dates as soon as you land in Singapore, completely avoiding the long and difficult process of trying to meet girls when you arrive.

In my opinion, meeting girls in Singapore is easy. The girls are friendly, clean, and stylish. Singapore is a beautiful city with many things to do on a first date. Not only that, it’s a densely populated city which means you’ll have plenty of opportunities to try and try again if you end up crashing and burning along way.

Sounds harsh, I know, but the reality is that crashing and burning is just part of the dating process. Every guy reading this knows exactly what I’m talking about.

Anyway, to end this article, I figured it would be good to answer a few of the most common questions about dating SG girls:

Based on my observances, yes. As I mentioned above, Singapore is a melting pot of cultures and you’ll see a wide variety of mixed race couples here.

Do the girls in Singapore speak English?

Yes. As a matter of fact, I’ve run into very few people here in Singapore (both male and female) who do not speak at least a little English. English is the primary language in Singapore, and you’ll hear it and see it wherever you go in the city.

If meeting girls in bars and clubs your thing, Singapore won’t disappoint (at least that’s that’s what I’ve been told). However, one thing that I do know for certain is that Singapore has very strict laws about obscenity and harassment.

You absolutely cannot be as aggressive and obnoxious as you would back home in the US or Europe. You can get into trouble really fast acting like a jerk in Singapore, so be on your best behavior if you’re headed out to the bars and clubs to find companionship.

Are there any negatives to dating Singapore girls?

The first thing that pops into my mind is distance. Singapore is extremely far from the United States or Europe, so if you are a white guy looking to meet a girl from Singapore, it’s going to be hard. It won’t be hard to to meet her. It’s going to be hard to maintain the relationship that develops since there will literally be oceans of distance between you and her.

You also need to keep in mind that Singapore is a very wealthy place, so she may have a higher standard of living than you. Just keep that in mind if you come from a lower-income area and she expects to live a life just as comfortable as she does in Singapore.

Then again, do you really want to be with a girl with materialistic thoughts like that? Not all women in Singapore are materialistic by the way. Just make sure you do your due diligence to find one that isn’t.